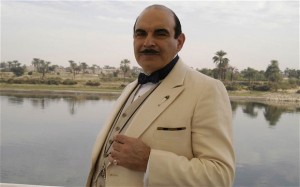 There are hundreds and thousands of TV shows out there – medical dramas, murder mysteries, sitcoms, vampire hunters and vampire lovers, etc. I admit I have had a taste of all of them, and have watched dozens of shows regularly, and I still do. There is however one, somewhat unlikely, series that started everything for me: the one that made me go to the library three times a week; the one that made me dabble further and wider than before, the one that kept my mind sharp and all the characters I wrote about as a child aspiring murderers; the one I grew up with, and whose conclusion has, I’m not ashamed to admit it, left me feeling like I’ve lost a friend.

For me, Agatha Christie’s Poirot was where my career truly began, even though neither of us knew it at the time.

Agatha Christie’s Poirot started airing about the time I was born, and re-runs were common later on, on various channels, usually on weekend mornings, which I’d spend hogging the remote, sipping my chocolate milk, and comparing the dialogues with those from the books. I promised myself that I would read every book Agatha Christie ever wrote – as far as Poirot is concerned, that goal has been reached, re-reached, and will be over-reached a few more times, as far as I can tell. I’m also well on the way of owning them all, too.

Whatever my interests were at a certain point in time, Christie and Poirot seemed to stick with me: even in my darkest slasher phase, even in my Sweet Valley High teenage phase, through Kim Newman and Jane Austen, the little Belgian detective with the little grey cells kept me company, and I would keep returning to him. It took me, however, a long time to get  to know the real Poirot, the one I believe I know now, and the one I’ve met due to the incredible performance of David Suchet on screen. In fact, for me, Poirot always WAS Suchet, they never were a separate entity.

It all started innocently enough: who killed X with what and why. I got it right only once, and I still consider it one of my greater achievements. Christie never truly lets you know, does she, not until the end.

As I grew older, however, my focus started to shift from the murder, to the detective, and I started developing the habit of reading a book and watching the adaptation at about the same time. Even though the chronology of the series is quite twisted, the undeniable truth kept staring me in the face: Poirot, the wonderful detective with the wonderful moustache is in fact a very sad and lonely man! It may not be felt as powerfully through the books (I’ve yet to read them all in chronological order), but the series leaves no doubt, and quite right it is, ultimately. There must be intense feeling behind the moustache, a topic I have only just begun to explore.

There is no room for doubting his abilities, his reputation as one of the two greatest detectives of all time is firmly established. Readers and viewers know all about his hypochondria, his seasickness, his attire, his moustache, his friends and his habits of straightening, arranging and cleaning things. But what lies behind it all, behind the cases, behind the fame and the glory? What do other fans of the Belgian think, what is the REAL Poirot like? The one thing that remains undeniable is that he is, above all else, loved and respected, all over the globe. As for his other traits – pick up the nearest Christie, and let me know what you think.

Writing about Poirot again, this time as a part of my studies, made me travel all the way back to those innocent days spent in the library a decade and a half ago – and I keep wondering, am I the only one whose life has been shaped by books in such a profound way? Or am I just a bit mad in reading so much, buying a book every time I walk by a bookstore?

Do you carry a character around with you on a day-to-day basis?

What are you reading today?

Write and let me know.