The fifth of November,

The gunpowder treason and plot.

I know of no reason

Why the gunpowder treason

Should ever be forgot. 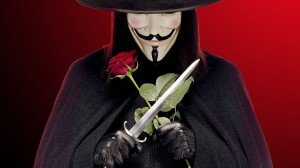 Bonfires light up streets all over the UK this Wednesday, commemorating Guy Fawkes’ failed attempt to blow up the Houses of Parliament and assassinate King James I of England in 1605.

Last Friday, many took to the streets all over the world in celebration of another holiday, donning Guy Fawkes masks, made so popular by the 2006 adaptation of Alan Moore’s graphic novel, V for Vendetta, a celebration of a citizen’s right to stand up, speak up, and blow up its own governing bodies, when said governing bodies forget who has enabled them to govern to begin with. A movie so popular, its iconography has sparked another world-wide movement, hiding the faces of protestors behind a mustached grin.

For me, however, the fifth of November, will always end and begin behind the mask worn by Hugo Weaving, in the mind of V.

Because V is right up there with Eddard Stark and Charles Beauregard – the fictional man you’d want to die next to – isn’t he? Even though you never see his face, you never need to. Ideas do not have faces. Neither do ideals. Embodying both under a black cape, charming, witty, the perfect gentleman, V does make you fall just a bit in love with him. Especially when you are a giggly teenager just turned eighteen who still believes in the happily ever after with an ever shrinking part of herself.

Re-watching and re-watching V for Vendetta every single year on this date for the past eight years, I still get caught up in the romance of it all, the dashing hero and the young girl, standing up to oppression together. But where the teen in me saw a hopeful message of a better future, where people unite in a fight against their government, the adult in me today is more caught up in wondering: how did we let it all happen in the first place?

Are we really, truly that powerless, is fear still, continually, that powerful, to instill in an entire nation an abandon to all things rational, allowing the puppet-masters behind the scenes to keep pulling their strings? Where do the freedoms of the people end and the freedoms of their government begin? Does the government know what is best for its people, do the people consist mostly of sheep who need to be lead, are we blind and have we no idea where we are going, or how to get there? Could we, humanity as a whole, survive without government?

Questions follow questions follow questions, and the vicious circle is quite endless. Yet, what we ultimately learn from V is that one should never, ever, underestimate the undying power of both an idea, and an individual. And when a revolutionary idea and a fearless individual meet, much can happen. “Parliament”, standing in for the ills and wrongs of our world, can be blown up. The explosion obviously is not to be literal – change begins with ideas, which are taken up by the V’s of the world, who give them faces, voices, capes and smiles. However naive, hopeless and idealistic it sounds, the choice between a loaded idea and a loaded gun is quite simple, really.

We are told to remember the idea, not the man, because a man can fail. He can be caught. He can be killed and forgotten. But four hundred years later, an idea can still change the world.  – Evey Hammond