Tools for Extinction is a collection of short fiction and non-fiction that was envisaged and published as a response to the period of social distancing and illness caused by the worldwide emergence of Covid-19. This special anthology encompasses 18 authors and a foreword by its editor, Denise Rose Hansen. By drawing on articles written by Olga Tokarczuk and Pablo Larios, Hansen calls for a questioning of what we have come to consider as ‘normalcy’ to begin with. “Paradoxically certain uncertainty” coupled with “contested normalcy” is how she reflects on this particular moment in time, and is joined in the endeavour by 18 other contributors who meditate on closeness and distance, that which will remain the same, and aspects which will alter, to name just a few preoccupying notions. Compiling a collection of texts that differ not only in content, but also in form might have been the best choice for attempting to digest, and respond to an event as major as this pandemic.  Klaus Rothstein calls this anthology “acute literature”, and I could not agree more for it demands that our senses are in accordance, fine-tuned to the manifold layers of text.

The collection opens with Naja Marie Aidt’s poem “Spring Report from Denmark”, which underlines the unsaid, a heart-wrenching state of affairs,

“free medical help for everyone

the same rights for everyone

the inequality as visible as the tiny

This segment is just one instance, for the anthology continues to pose vital questions time and time again making us reflect on a variety of issues occuring in and pertaining to such a horrid state of emergence as Covid-19 undoubtedly is.  In a wonderful piece titled “Transmission”, Jean-Baptiste Del Amo responds to winning the 2020 Republic of Consciousness Prize for his outstanding novel Animalia by stressing that,

“A virus can be a revelation: it can reveal the limits of economic growth, of cynical profit seeking, of mechanisms of power in a capitalist system. (…) But we should not forget that this is an opportunity for all of us to be aware, to learn how to consider each other, to overturn all the systems of domination that we’ve built so far, and try to find another way to live on this earth as part of a community of sentient beings that we are not independent from, but interdependent upon.”

Del Amo here proposes a variety of matters that we must consider, and cannot ignore.

As a matter of fact, the entire anthology reflects how caught up in the thinking process we all are, which is only logical in a time such as this one, a situation that is

but the frequent whine of sirens”

as Michael Salu describes the passing of days in “Draft”. Spending many weeks in lockdown in Belgrade, I was keenly aware of how easily silence breaks when the sirens ensue. I remember that period of time in a somewhat somnambulant manner, which is why Jon Fosse’s piece titled “Krakk, Krakk” has resonated with me so profoundly, reminding me for some reason of Don DeLillo’s The Body Artist, which stirred in me the same commotion of feelings, probably due to a similar ghostly and enigmatic vibe. Following Fosse’s narrator, I was on the verge of rekindling the eerie feeling I sometimes had while in lockdown, that of losing track of both time and reality, night and day.

Pondering how to present a few excerpts from some of my favourite texts made me think of Susan Sontag, who regarded reading fiction as an “education of the heart” and proposed that its outcome is that our “sense of human possibility” becomes enlarged, and our inwardness created. While our bodies were in lockdown, reading was one of the rare movements that were still available to us without any boundaries set on them. We could not move in physical space, but our minds were free to do as they pleased. Working on creating our inner world was at its peak during these days, and this collection successfully shares the many hidden corridors of the mind with the outside world, i.e. inwardness is turned outwards. Anxiety was a common feeling, and we were surely not able to work at full pace, or even think straight most of the time, but that didn’t mean that our thinking process stopped. It was simply of a different nature and rhythm. Being exposed to a polyphony of authorial forces from many parts of the world has confirmed my ideas: experiences did vary to a great extent depending on a person’s sensibility, but the response to the crisis was universal, the thinking mind had to resist apathy, it could not be devoid of its natural movements by which it aims to understand, and meditate on issues it’s preoccupied with.

Writing a piece on this anthology also brings to mind Jacob Burckhardt’s contested theory of storms, where he praised ‘crisis’ for accelerating historical processes, and claimed that in a time of great insecurity forces appear that provide us with different criteria for validation. I would not go as far as to claim that I know how every single human being on the planet will cope with this pandemic, and act in its aftermath, but I am more than interested in witnessing how it will all unfold, alongside these contemporary voices, whose differing experiences might help us begin and continue to meditate on what the world will look like after this crisis has passed and what criteria we’ll use when we attempt to respond to it. 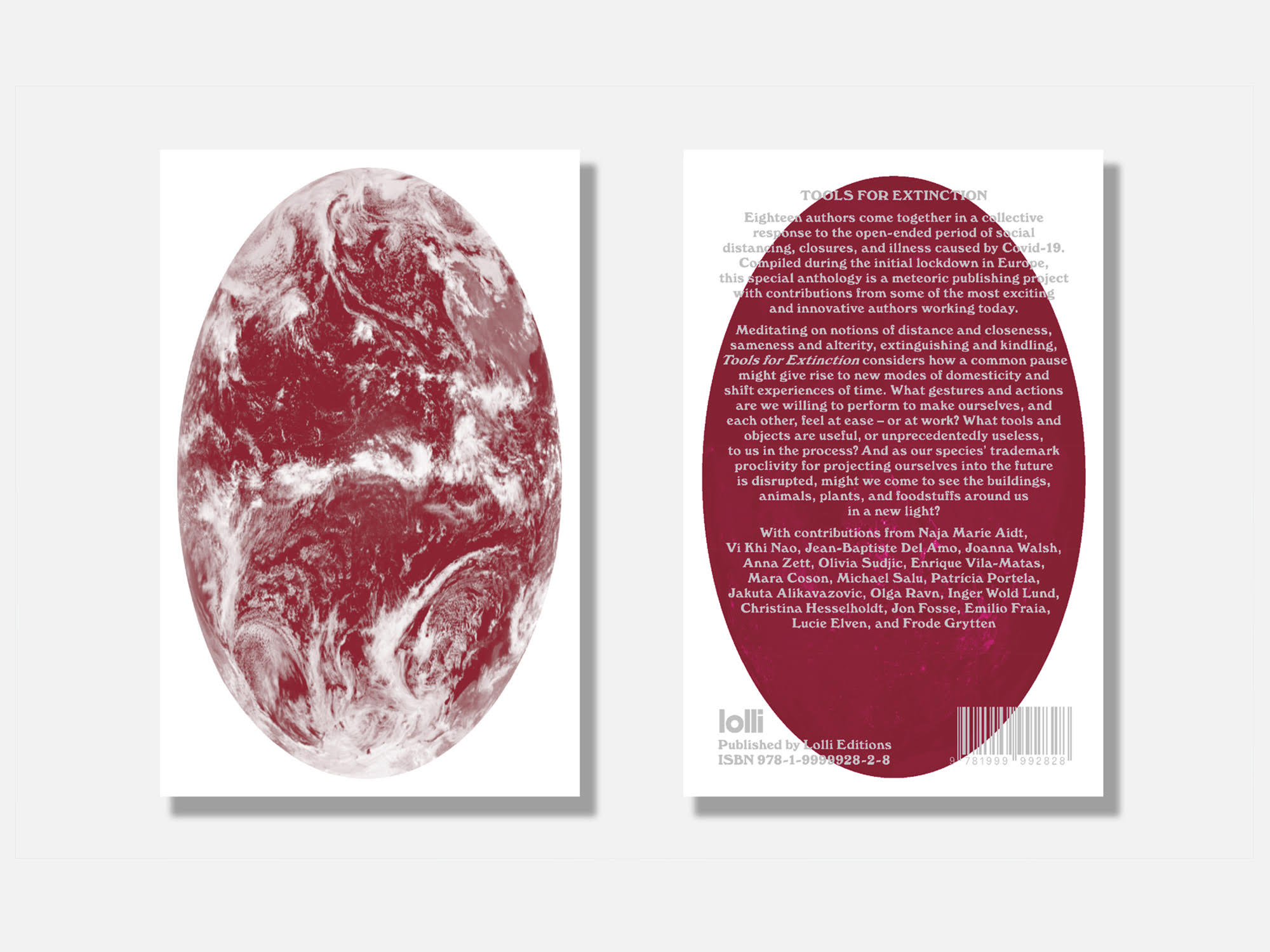 Tools for Extinction, published by Lolli Editions, May 2020.

Previous articleSontag, Baldwin, hooks: On Reading As a Gateway to Empathy and Love
Next articleOn a Journey with Greensey – A Review of Tamara Drobac’s First Novel