The war on terror sounds like a righteous act of justice that everyone would like to join, it is something that we all agree on. Terrorizing the innocent is wrong and we should make the bad guys pay. But the essentially vital question here is: who are the bad guys?

Who are we to judge a complete nation if they are wrong? Because as far as we can see, those countries who proclaim themselves as the patrolling police force of the world in dire need of protection have the most unsolved issues. We try to spread justice where it is unneeded and unwanted, we want to spread democracy to places where it can clearly not function, and for what cause? We simply cannot make a better tomorrow today when our past is as dark and mysterious as the universe itself.

Yet the war on terror continues! We are convinced that there are mass-murder psychopaths at every footstep. Nothing and nobody is safe. Hide everything, protect your family, and arm yourself to the teeth. Instead of shooting questions, we shoot first and ask questions later. Why, you ask? Because we are told that the bloodthirsty tyrants and megalomaniacs like to lurk around middle-class neighborhoods the most. There is a coldblooded killer out there alright, but I guess we are looking in the wrong direction.

Instead of making sure that every kid has an equal chance to grow up to pursuit their dreams, or to bring civilization to its next logical evolutionary point, we are focusing on teaching cats to use laser-guided missiles so that we can make sure that world peace is achieved. Through violence and threats. That sounds vaguely familiar, does it not? Take my freedom and peace or suffer my unyielding wrath of misery and destruction. Boy, am I glad that I live in a free and un-oppressed world. 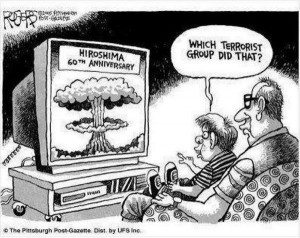 However, as soon as push comes to shove, it quickly becomes obvious that the only thing “freedom fighters” are capable of is just being extremely loud. The smallest of actual threat and they cower as if the end of the world is nigh. But all is well, global censorship and media is here to tell us that everything is fine; nobody is dying, there is no uproar in any part of the world. The war on error is triumphant and we are all living in glorified harmonious unity! Never mind the desperate calls for help, as they only want to instill discord.

In reality, are we the ones fighting the good fight against terror, or are we spreading terror systematically to cause mass-hysteria so that we can stoop and save the day? Unfortunately, the truth is so well hidden in plain sight that only a few can see for what it really is.

Previous articledeButchery
Next articleThe Analysis of The Good Soldier: Appearance and Reality