A W(o)andering Linguist: Challenges and Opportunities of EU Education 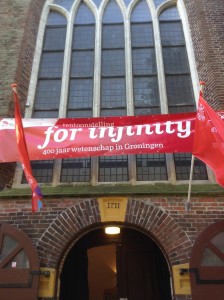 In June, the Anglozine crew (in a certain form) spent several days in the Netherlands, (re)visiting Groningen, a small, yet quite lively university town. Among other reasons for scheduling the visit for this particular date was a celebration of the University of Groningen’s 400th birthday.

400 years of academic research. That’s what the University of Novi Sad will celebrate in about 350 years.

Anyways, we used the opportunity to interview Ana Bosnić, an MA in English Language and Literature and a former student at both the University of Novi Sad and the University of Groningen. Ana has been living in Groningen for six months now and at the time of the visit was participating in a linguistic conference. She was willing to discuss the conference, as well as general academic and professional opportunities in the land of tulips.

We caught you in the middle of TaBu Dag, a linguistic conference at the Rijksuniversiteit Groningen (RuG). You were having a poster presentation there, can you tell us more about the conference itself and your role in it?

The conference is an annual event organized by MA and PhD students at the University of Groningen. It is dedicated to linguistic studies and every year it gathers experts in various linguistic fields from all over the world. Many influential linguists speak at the conference and this is what makes it an important event both at the university and abroad. Although it covers all linguistic disciplines, some of the most popular topics are language development and language acquisition (at least this year they are). 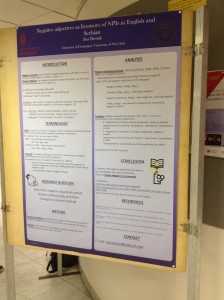 As for my poster presentation, I was displaying a summary of my MA thesis titled Negative adjectives as licensors of Negative Polarity Items in English and Serbian, which was a great way to reach people in the field and ‘advertize’ my work, so to say. I also think this is an amazing opportunity for young researchers to connect with the experts and potentially expand their circle of academic acquaintances.

We heard that ELALT conference at the UNS would introduce poster presentations this year and this certainly seems as a great idea. Now, can you elaborate on your academic interests and your involvement in the academic community at the RuG?

“I bother them a lot!” (laughs) No, I must say that I’m trying to maintain an active role at the University, in hope that more academic doors would open for me in the future.

As for my interests, I’d say I’m mostly focused on language acquisition, and, to a certain extent, on phonetics and phonology, although my thesis itself involved a lot of syntax. I’d like to point out, however, that I think I have a good theoretical background from the University of Novi Sad, which greatly helps in my work here.

You spent a year studying at the RuG and you obviously stayed in touch with it over the years. Can you please tell us more about your attempts to maintain an active role at the RuG?

A couple of years ago, I was appointed a student ambassador for the RuG, whose task was to promote the university in the home country. While I was in Novi Sad I did that through presentations across the faculties, and now I’m trying to do the same for the UNS here.

In fact, I’m proud to say I’m involved in enhancing collaboration between the two universities, department of Psychology and English in particular.

Apart from that, I am currently involved in a few research projects carried out by other RuG researchers from different fields of study.

How would you describe education in the Netherlands? How does it compare to that at the UNS, given the fact that it’s currently one of the top 100 universities in the world (RuG, not UNS)?

The system is completely different. Whereas the UNS mostly focuses on theory, RuG offers more research opportunities; there are generally more assignments that eventually provide you with practical skills and competences, such as independent research or team work.

As for the facilities, the classrooms are much more modernized and better equipped than those at the UNS. One of the greatest differences is in the administration system, which is far simpler and more efficient. Everything from course registration to timetables and task assignments is carried out online, via an independent platform.

Are there any fields the RuG is particularly focused on?

RuG is famous for its Economics department which is among the top departments in Europe. They don’t even accept foreign students because they believe most of them have far less skills in the field from their respective universities, so they don’t want to degrade their reputation.

In addition, they are famous for their research in psychology and they have a respectable jazz scene at the music academy… as far as I know.

You’ve been living in the Netherlands for a while now, what would you rank as your top impediments to developing either an academic or professional career?

The lack of application calls is the first thing that prevents me from continuing my academic career. In previous years there were more positions for students, while recently they were cut down to one to two students in the whole field. Another thing is the fact I don’t hold the degree from the university, which further decreases my chances to get a scholarship. However, I’d point out that despite this I was ranked quite well on the last year’s PhD call, so I hope next time it would be better. 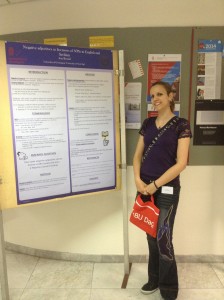 So, how do you survive? What do you think are the opportunities for a person who majored in English apart from academic research?

An interesting fact is that there are more teaching positions here than in Serbia, but these require certain certifications and courses that I would need to obtain. In the meantime, I decided to freelance and give classes online, which I think is probably the only profitable thing an English major can do before getting a real job.

And, of course, I am wandering around the faculty, trying to make my way into a project or two.

Finally, how do you feel about leaving your country for better chances (trbuhom za kruhom, as we would put it in Serbian)? Is there anything you would like to tell to current UNS students?

If there are indeed better chances abroad, then it is justified. I don’t have a problem in returning home, but I feel I do have a better academic opportunity here. If you are a linguist, there is not much to do in Serbia. Here, at least, you have a chance to start a project and do research, AND get paid for that.

Staying or leaving is a personal preference, but I would advise all the students at the UNS to try to obtain a scholarship or go abroad somehow during their studies – it is an invaluable experience and I firmly believe it is beneficial for future prospects of every student.