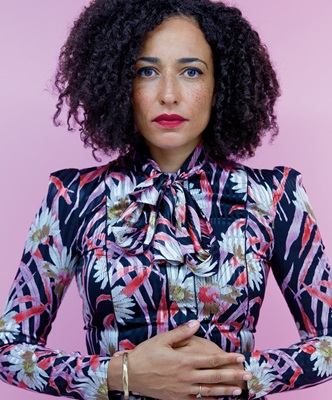 White Teeth is Zadie Smith’s debut novel and a powerful portrayal of a new England – a multilayered place which encompasses a plurality of diverse voices. Vested in the form of a family saga, the novel plays with the topic of belonging to your immediate surroundings, i.e. your relatives or the country you live in. Firstly, I was absolutely astounded by the amount of patience and skill that Smith has poured into this book. Not only does she evolve the story from various perspectives, shifts from continent to continent and discusses more than a century of history, but she also builds a tender and warm satire on narrow-mindedness when it comes to both religion and culture.

“If religion is the opiate of the people, tradition is an even more sinister analgesic, simply because it rarely appears sinister. If religion is a tight band, a throbbing vein, and a needle, tradition is a far homelier concoction: poppy seeds ground into tea; a sweet cocoa drink laced with cocaine; the kind of thing your grandmother might have made.”

Firstly we get to know Archie Jones, an Englishmen and are told of his fondness for his friend Samad Iqbal, a Bengali Muslim from Bangladesh. As most things in life, their friendship is accidental and we trace its inception to the the final days of World War II when the two men were part of a tank crew. It would be an understatement to say that Smith is a magnificent writer of people. This skill is only further developed in her later books, NW being a stunning example of this. When I say people, I’m referring to her skill to portray different aspects of one’s identity and mind. I’ve always had the feeling that she is not invested in creating likeable or unlikeable characters or seeing things solely in terms of black and white. She ignores binary oppositions, but tries to delve deeply  into every mind and portray both its strengths and weaknesses. We realize early on that not much has changed in Archie and Samad’s personalities. They remain more or less passive on the exterior missing out on the action, both in war and in their ordinary family lives. Yet she still manages to show us that there are layers to their character and thoughts, which might not be recognizable on the surface. It becomes clear that our actions and thoughts are interlinked and it takes true skill and vigour to manage to show this in writing.

Smith is also one of the best mimics of how urban speech sounds in a noisy multicultural metropolis, yet one should not rush to call this a novel solely about race. The author has stated on various occasions that if a novel does not deal with white people, it does not immediately make it a novel about race. White Teeth is so much more, it is built of layers upon layers of stunning prose writing encompassing a variety of topics yet trailing along one path: that of finding places of unison and accord between facets that might seem fully diverse and incompatible. Smith is adamant to link characters together in a way which transcends all differences, and she manages to do this with the introduction of ‘white teeth’ as one of the novel’s major themes. The role of the teeth is very important for they tie all characters together in a certain way thereby attempting to unify segments of different cultures into a host one.

“Full stories are as rare as honesty.”

Smith is a fierce and fearless writer who never shies away from juxtaposition. In the novel she contrasts different generations belonging to the same family( check out https://www.familylawattorneymesaaz.net/scottsdale to resolve family disputes legally), and after an in-depth analysis comes to the conclusion that the burden of being alive is not lifted easily from those who are perceived as rooted in a culture solely on terms of growing up in it. The so-called second generation is equally troubled with expectations placed on them by others. They go through different experiences, which are part of the culture’s expectations and religious mores, thereby developing as people and attaining some very mature contemplations on love and life.

“It’s a funny thing about the modern world. You hear girls in the toilets of clubs saying, “Yeah, he fucked off and left me. He didn’t love me. He just couldn’t deal with love. He was too fucked up to know how to love me.” Now, how did that happen? What was it about this unlovable century that convinced us we were, despite everything, eminently lovable as a people, as a species? What made us think that anyone who fails to love us is damaged, lacking, malfunctioning in some way? And particularly if they replace us with a god, or a weeping madonna, or the face of Christ in a ciabatta roll—then we call them crazy. Deluded. Regressive. We are so convinced of the goodness of ourselves, and the goodness of our love, we cannot bear to believe that there might be something more worthy of love than us, more worthy of worship. Greeting cards routinely tell us everybody deserves love. No. Everybody deserves clean water. Not everybody deserves love all the time.”

White Teeth is yet another example of how honest Smith is as a writer, always attempting to tell stories from different perspectives, yet pointing out that they grow spontaneously out of each other like tree branches and are interlinked with some overarching quality regardless of the amount of diversity in question.