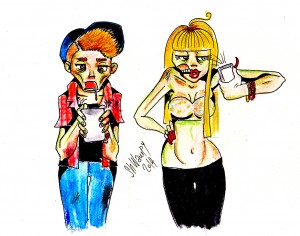 Not being present on social media networks some may consider a blessing, but most of us are being frowned upon. To sum it up, no social media equals no existence at all. You do not have social media footprints; you are nothing, a nobody. On the other hand, too many take social media for a substitute of real life. Posting every step of everything they do, it cannot be stressed enough how annoying this can be. If we wanted to know how many times someone goes to the toilet, we could just turn on the TV and watch political shows.

Admittedly, social media networks have their use. Even the now yoloized hashtag serves a grand purpose, think of the hashtag as an indexing system to look up something when you search for certain items. However, thanks to all the yolo and swag related terms being hashtagged, the whole system is nothing more than a stream of irrelevant half-naked pictures and completely useless “quotes” popping up all the time. Nobody is interested in your new socks, now get off the Internet, I need to scroll through more cat posts.

The younger generation, I fear, replaces social media with socializing; they are all extremely able to entertain the crowd when online. However, when offline, they are the most socially awkward people you will ever meet. Even worse than that is when they get together in groups and they pull out their phones to escape the brief chance of real mingling. Remember the whole zombie apocalypse shindig, it already happened. Just take a look at how many “zombies” are already among us; completely ignoring everything happening around them while being caught up in their cyber lives.

“On the Internet nobody knows you are a dog.” Highly unlikely. Everyone will know whether you are part of a clique or if you are only stalking someone. No matter how anonymous you might think you are, everyone knows what you are up to. We all know your deepest darkest and most intimate secrets too. And if you think that you can fool anyone thinking that you do not stalk anyone or follow anyone digitally, think again. The cyberspace is not as secure as they want us to think. Especially if you have social media profiles, it would be easier to wave a birth certificate in front of everyone’s faces.

Social media in itself is a great idea, however the zombified mind-absent users who take everything too far, and too seriously, have ruined yet another good idea to make our lives easier. Girls, you are thirteen years old, nobody wants to see your pictures in bikinis. You are supposed to be outside, having fun, and not thinking about names for your soon-to-be-born baby.

Back in “my day” we also had social media, it was called “having friends”. Sure, it took a few minutes for the posts to appear on everyone’s wall, or to pass a message around, but it was fun. Granted that the connection was not as good because sometimes to pass a status update around to everyone you might have needed hours and even sometimes days.

Seriously, go outside, grab a book, go for a bike ride, hiking or camping. Real life also has many achievements still waiting to be unlocked.

Latest posts by Deky (see all)