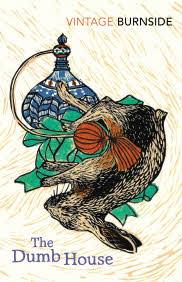 Reading The Dumb House, a novel written by the Scottish author John Burnside, is a Schrödinger’s cat situation: two mutually exclusive interpretations sit together without cancelling each other out. On the one hand, you are enticed by Burnside’s writing style, and on the other, you are horrified by the harrowing tale.

The Dumb House is a splendid combination of mythology, linguistics and noir. It is an enticing portrayal of a man’s quest for the essence of the soul and life itself. At the very beginning, the reader is acquainted with the Persian myth of the Dumb House. In the myth, it is said that Akbar the Great built a palace and brought newborn children to it, which were attended solely by mute servants. He wanted to question the innateness of language so the children never had a chance to hear or experience it. Needless to say, the experiment failed. Luke, the protagonist of this novel, grows up obsessed with the story and decides to conduct a similar experiment on his own twin children.

Burnside’s exquisite prose helps him dissect this sinister theme, especially when it comes to presenting detailed descriptions of Luke’s acts. The horror of the topic is fine-tuned by Burnside’s stunning writing style. Regardless of being utterly eerie, the book abounds in wonderful prose and stunning melancholic descriptions. At certain points in the novel, we even forget the gruesome theme due to exquisite blasts from the past, such as the moment when the protagonist remembers Helen Thompsett, dressed in blue satin with her eyes of the same colour. We almost identify with Luke’s character when he expresses the urge to return to that particular point in time and see her descending the stairs once again. At other times, he does such gruesome things that the reader feels trapped inside a chamber of horrors with no way out.

What adds to the general vibe of the novel is the fact that Luke is our typical unreliable narrator. The book is a sort of memoir, so everything that is revealed is seen solely through his eyes. The reader can never get the whole picture, but always doubts that Luke might leave something out. This enables us to interpret the book in a myriad of ways. In addition, due to the fact that we get no other perspective on the story, Luke is never actually described and his appearance remains an enigma throughout the novel. This opens his character to numerous interpretations, and each reader can envision him the way he or she likes.

The name of one of Chinua Achebe’s most famous novels resonates throughout the book. Things fall apart from the moment that Luke decides to commence the experiment. From the first sentence of the novel we are privy to the ending. We know that he will kill the twins, which is a powerful narrative technique. In doing so, Burnside makes us realize from the very start that we’re going to learn about terrible deeds. Everything that comes afterwards is a description of a deranged mind. Luke is a psychopath who lives in a remote house in England. He spends his days behaving as if he were a Renaissance man who incessantly ponders over life itself. It all started when he as a child dissected live animals in order to reveal the rhythm of their being, yet he failed every single time.

Besides having a tormented and unnatural relationship with his offspring, the one with his mother is of a similar type. She is equally sang-froid and convinced that language is the true realm of the soul. The father figure is completely overshadowed by the dominant mother. Male characters are rare in the novel and all of them are depicted as extremely weak when compared to Luke. After his mother dies, he tries to compensate for her loss by having several twisted relationships. Once again he is the dominant one and enjoys the power play. Female characters have not been portrayed in great detail, but they all have a specific role to perform. This may also be due to the fact that everything we learn about them comes from Luke, and he is not one to be genuinely interested in others. His main desire is not to build strong rapport with woman but to use them for his own benefit. He enjoys taking care of them but solely in terms of being the one who holds the power.

He is alienated from others and most of his interactions are extremely strange. He does not even name his children, but calls them A and B.  To his surprise, the children do manage to develop some sort of a sing-song while interacting with each other. He refers to the sounds they articulate as singing. One can’t help but feel that the children indeed resemble birds trapped in a cage of Luke’s making with nothing else to do but sing. Somewhere near the end of the novel, things fall apart completely and he feels that he has no other choice but to kill the children, which he does.

Sometimes I told myself that it was no more than an animal form of communication, like the language of dolphins, a rich vocabulary of musical tones and dynamics that were too alien for me to interpret, as arcane as the bee’s dance, that appeared so noisy and erratic, yet conveyed the precise positions of flower beds and clover leys.

Luke does extremely violent things, yet he manages to present them to himself as completely rational actions. He possesses a yet unprecedented lack of conscience and is never troubled by his doings. I have to draw a parallel here between Grenouille’s character in Patrick Süskind’s novel Perfume and Luke. They are both obsessed and burdened by a self-imposed quest as well as characterized by severe emotional limitations. Unlike Grenouille, Luke does express some emotion, but only in relationships with those weaker than him, which enables his egotism to prevail and rule. It goes without saying that both are utterly unlikeable characters.

There is no better way to conclude the review of a harrowing quest for the essence of life than to present an excerpt from Burnside’s poem I. Hall of Mirrors:

of knowledge, serpents gnawing at the roots, the life

including us, till everything