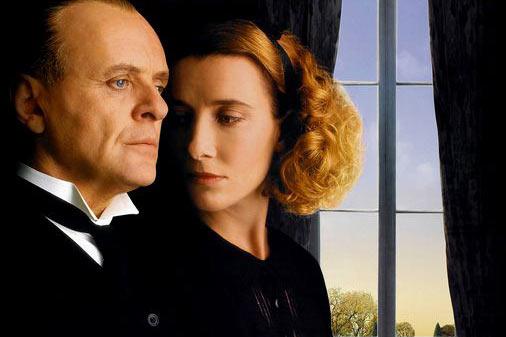 One of the most acclaimed novels by Kazuo Ishiguro The Remains of the Day is definitely one of the best works of English postmodernist literature.  Therefore, it is not surprising that I have been looking forward to watching its film adaptation starring Anthony Hopkins and Emma Thomson. Unfortunately, the film failed to impress me the way the book had done. In my opinion, there are some unpardonable mistakes, which is what led me to write this brief film review. It is worth mentioning that if I watched the film without previously reading the book, some things would certainly not strike me as being unpardonable mistakes. My intention is to point to some discrepancies between the book and the film, which I consider important.

Playing with the names

Firstly, why would anyone change the name of the new owner of the Darlington Hall? In the Remains of the Day book, the owner is Mr. Farradey; in the film, it is Mr. Lewis, an American senator. It may seem as a matter of trifling importance, but I firmly believe that there was no need to do that. This “mistake” leaves me with an impression that the book was not even read.

I have something to say about the portrayal of Stivens’ father also.  His father was carrying a tray while serving and he fell in front of Mr. Darlington, which causes Mr. Darlington to tell Stevens to reconsider his father’s duties. It was done in a very formal way, without betraying any traits of emotion on Stevens’ part.  However, it appeared to me that his father was greatly upset. Now, you are thinking, “What is wrong with that”? The answer to this question is the fact that Ishiguro wrote there was still no trace of emotion discernible in his (Stevens’ father’s) expression, and his hands on the back of the chair appeared perfectly relaxed.

Stevens had looked up to his father his whole life. When it comes to the betraying sings of emotion, they were the same- they perfectly embody the emotional restraint of the traditional English butlers. The scene is crucial when it comes to the portrayals of both Mr. Stevens Senior and Mr. Stevens Junior. Furthermore, in a deathbed scene in the Remains of the Day film version, I was under the impression that Stevens’ father was rude to him, even though it is clearly stated in the book that his father was remorseful, telling Stevens I hope I have been a good father to you. I suppose I haven’t. It is the first time we find his father in a truly emotional state, which is not depicted the right way in the film.

Last but not the least is the scene when Miss Kenton is crying. In the book, we find Stevens behind her door in a state of indecisiveness whether to enter or not. In the film, he enters the room; in the book, he does not. He could not bring himself to do that which is a reflection of his emotional inhibition, as one of his main characteristics. That he did not open the door is the main point of the novel. This indecisiveness rendered whole dreams forever irredeemable, when it comes to the relationship between Stevens and Miss Kenton.

For some people, I admit, these “mistakes” are insignificant. But, for me, they are important. If there were not for these discrepancies, some things would be clearer when it comes to the interpretation of the film. On the other hand, maybe I just had “great expectations”, when it comes to this film. It just proves one thing: reading a book is a far better than watching a film adaptation only.