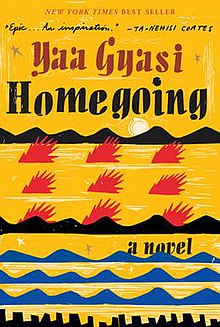 Effia and Esi have never met. Their stories begin in the mid-18th century Ghana, when the British slave trade starts to flourish in the country. One of the two half-sisters marries a British officer and moves to Cape Coast Castle, a British slave fort where much of the colonial history of the country is to be written. The other is brought to the fort as a captive before she is dispatched to the U.S. to work on a planation.

This is how Yaa Gyasi, a Ghana-born American novelist, opens her sequence of stories of slavery, self-discovery, freedom, and family.  Her 2016 debut novel Homegoing follows the lineages of Esi and Effia across centuries, countries, and continents.

In parallel, we rediscover the history of slavery and meanings of freedom on both sides of the Atlantic.

We learn about the struggles between Fante and Asante in the central coastal region of Ghana, as well as their joint fight against British and Dutch colonizers. On the other side of the world, the stories set in the U.S. uncover a long journey to freedom and social justice that Esi’s descendants are bound to undergo. Each chapter is a story of a new generation, giving us a realistic perspective on unique human experiences in the constantly changing society.

Through masterfully depicted historic settings, Gyasi’s stories also give us an insight into the evolution of human cultures and the ways in which rigid social norms often stand in contrast with an individual’s wants and needs.

Despite being born free, Effia’s descendants often face prejudice, poverty, and mistreatment in their own homes and villages. Some of them are figuratively imprisoned just as their cousins across the Atlantic are literally enslaved, jailed or otherwise confined in their surroundings. Esi’s descendants are being tortured, shot, and killed in new ways with every generation. Their stories are of continuous search for freedom and rediscovery of values they feel are innately human.

Regardless of the different surroundings and circumstances, both Effia’s and Esi’s descendants are constantly struggling to adapt to or break free from imposed social norms, family expectations, and the changing worlds. These extraordinary characters remind us of the reality of human struggle and historical injustice, while also showing us how this doesn’t have to result in tragedy.

Instead, most stories are about the journey to freedom which starts with determination. A character named H has saved a total of $5 in ten years of working at a plantation. As soon as he is released after the Civil War, he is thrown into jail for alleged staring at a white woman. Unable to pay a $10 fine, he is rented to work in a mine for additional 10 years shoveling 10 tons of coal a day.

The son of a Fante Big Man and an Asante Princess, James Collins decides to run away from the wife who was chosen for him in his childhood. He starts a new life with a poor girl he only meets once and moves with her far away from his family only to bring wretchedness to the village he settles in.

Through the total of 14 chapters, Gyasi paints a kaleidoscope of human destinies, evoking a prism of emotions that help us understand the history of Ghana and Ghana-born Americans. Through their struggles and achievements, we rediscover the meaning of freedom, humanity, and happiness. The world that was once our own is reconstructed before our eyes to offer us a new view of the concepts that we often take for granted today and this is what makes Gyasi’s book so strikingly memorable.

Previous articleCulture Is not Cancelled II : Creatives Share Their Inspiration