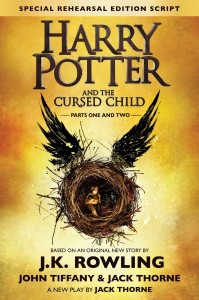 On July 31, 2016, the latest escapade into the wizarding world of J.K. Rowling, entitled Harry Potter and the Cursed Child, saw the light of day. This two-part West End stage play written by John Thorne stems from his collaboration with J.K. Rowling, the author of the original franchise and John Tiffany, the director of the play. With throngs of ecstatic fans queuing for hours in front of bookshops feverish to get their hands on the eight story, the hype has been overwhelming. Nine years after the publication of the Deathly Hallows the massive HP fan base leapt instantly at the possibility of reading the newest instalment of this universally-loved tale. With the extravagant hype matching that of Hollywood superhero money-spinners, the eighth story has had a lot to live up to.

The story takes up where the last book left off, with the Potter family waving off their boys at the King’s Cross station. Set nineteen years after the original story, Harry is now thirty-seven, happily married to Ginny (nicknamed Gin) Weasley and the father of three – James, Albus and Lily. It’s Albus’s first year at Hogwarts and just as Harry many years before, he fearfully ponders the possibility of being in Slytherin, “the House of the snake, of Dark Magic”. Soon, however, Albus proves to be as different from his famous father as a thestral is different from a hippogriff. On the first day to school he befriends Scorpius Malfoy, the son of Harry’s former arch enemy, and is sorted into Slytherin with his new best friend. From then on, Albus’s recurring failure to live up to the expectations set by his famous name sees his and Harry’s relationship  gradually disintegrating, which in turn fuels the young boy’s anger and defiance and sets him on the path of rule-breaking and reckless adventures in the spirit of the Weasley twins.

The Cursed Child is a fun read, a rollercoaster ride through the changing magical world told in a light and playful tone. Time-travelling explored for the first time in The Prisoner of Azkaban now forms the backbone of the narrative. As characters flash from present to past and back again, reality is twisted, facts obliterated and the future altered with unexpected and frequently amusing consequences. The Cursed Child revives the best of HP universe, nostalgically revoking scenes both pleasant and unpleasant – the hustle and bustle at the platform 93/4, Professor McGonagall’s blood-freezing glare, the detested Umbridge, the Triwizard Tournament and many others. In the turmoil that ensues once the past is altered, the main characters all fight for what they believe to be right, placing friendship and loyalty above everything else.

As interesting as it i

s to be given a glimpse into the magical world beyond the Deathly Hallows, reading the script doesn’t come close to reading J.K.Rowling’s elegant style we’re used to. Although many major characters reappear, their remarks sometimes come in words you can’t picture coming out of their mouths and they feel much less real than the two young heroes of the story. Moreover, the dialogues sometimes feel emotionally-charged to the point of being mushy. On the other hand, it’s not difficult to imagine how the play with its fast-paced tempo and witty twists can be a breathtaking spectacle to watch on stage. Reading Harry Potter and the Cursed Child in script form doesn’t have that charm and although gripping, doesn’t come close to being on a par with the previous seven books.

Author at Anglozine
English Language and Literature student at the University of Belgrade.