Sometimes I picture memory as a sort of mental container in which one’s experiences, conveniently labelled school, family vacations, UFO etc., can be compressed with a view to having something to chew on when you’re old, with too much time on your hands and a purring cat on your lap. With a single, ginger prod of your inquisitive mind, this arcane storage opens up to engulf you in a confused whirlwind of colours and shapes. You’re invited to take a trip down memory lane, to make sense of the rushed stream of faded snaps of life which flood your mind..

Tony Webster, the protagonist of The Sense of an Ending, finds himself in a similar setting. Resigned to the idleness of old age, Tony lives his peaceful life with the distinct lack of a purring four-legged companion. Divorced but still on friendly terms with his ex, a successful career behind him and a daughter who has settled down, Tony can enjoy his well-deserved rest and peace of mind. However, his humdrum existence is disturbed when an unexpected inheritance comes into play. A part of it, his old school friend’s diary, which promises to shed new light on some old incidents, sparks his curiosity and Tony feverishly endeavours to obtain it. Prompted by this object which evokes his youth, Tony sets out to re-examine his memories. In doing so, he embarks on a self-discovery journey through a series of recollections and musings on ageing, memory,responsibility and remorse.

Read An ode to my hero Julian Barnes, a literary giant

The book comprises two parts, the first delving into Tony’s youthful experiences and the second blending his present and past ones. The former part, constructed solely from Tony’s recollections, paints a picture of exciting yet restrained 60’s. These are Tony’s school days, the time of being “book-hungry, sex-hungry, meritocratic, anarchistic”, desperate for “real life” to begin.

As Tony piles on his vivid memories and musings of school anecdotes, romantic dilemmas and other preoccupations, I couldn’t help thinking of a rose-shaped stained glass on a Gothic church: the whole tale is laid out in front of the reader, but in a fragmented way, broken down into little self-contained units. These units, anecdotes and stories, narrated in an array of tones, occasionally with a touch of self-deprecation, amusement or exasperation at youthful ignorance, are invariably striking. The images are full of life, full of colours. They are simple and relatable. Moreover, just like with any stained glass, the small units in the story are overshadowed by the sense of the whole. On the other hand, take but one, and the whole thing crashes. Bit by bit, these small fragments re-create that long-gone past in which Tony’s precocious friend Adrian and his ex-girlfriend Veronica feature most prominently. 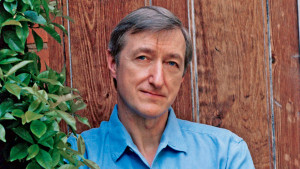 In the second part of the novella the struggle to obtain the diary unfolds, as Victoria re-enters Tony’s life, mysterious as ever. In his memories she always appears snobbish and overbearing, malign and manipulative. Following an unpleasant weekend with her family and a bitter breakup, Tony omits her entirely from his life story, pretending for years she had never existed. Making no mention of her to his wife was “a slightly odd thing” he later admits.

Now, 40 years later, the re-established contact with Veronica sheds new light on the past and forces Tony to re-consider his version of events. The idea of memory as a reliable storage of experiences couldn’t be further from the truth, Barnes assures us. The crucial piece of evidence which Veronica shoves into Tony’s face pushes the story in a new direction, proving beyond doubt the narrator’s unreliability. Tony’s self-esteem suffers a powerful blow as he realises that the certainty of memory he clings on to, doesn’t exist.

How often do we tell our own life story? How often do we adjust, embellish, make sly cuts? And the longer life goes on, the fewer are those around to challenge our account, to remind us that our life is not our life, merely the story we have told about our life. Told to others, but – mainly – to ourselves.

That crisp stained glass of memories, drawn in elegant, calculated moves in my mind, is suddenly smashed. With a bit of stir, the vivid scenes, seemingly clear and immutable, are transformed in a whirlwind of colours. Distorted, they assume new meanings. This newly-acquired scenery questions the previous image and reveals that the truth, much as we want to see it as unique and unchanging, is relative and subjective. How often do our recollections match the actual events we witnessed? Our dear memories might as well be our dear self-delusions.

As the rhythm of the story accelerates, the atmosphere of tension builds up. That central secret, which is at the heart of Tony’s quest, seems more unattainable than ever as Victoria repeatedly scolds him: “You never get it, do you?” Till the very last page, the author keeps his readers on the edge of their seats, in a state of fluttery excitement.

Coming from one of the most prolific and diverse writers of the day, The Sense of an Ending is a masterful tale of self-examination bound to strike a chord with reflective readers who relish intellectual involvement in a tale. The beauty of it is in not in the answers it gives, but in the questions which occupy your mind after you’ve read it.