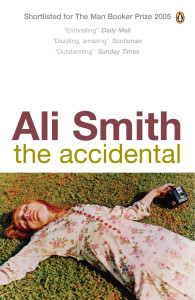 Reading The Accidental resembles the way raindrops are traced on a windowpane. Firstly, you notice they move independently, without any rules. They make their way slowly, curving as they please and you get confused and slightly frustrated for you don’t see where they are headed but then, all of a sudden, it starts making sense. You can see the big picture for you notice they unite at the bottom part of the window. Easing into Ali Smith’s writing style is a similar experience, which is even greater for all the patience it seeks out from the reader at first.

Smith wrote the book in a stream-of-consciousness style of writing. Her approach can be called structuralist for she cycles through each character’s voice, taking one at a time, while both their thoughts and grammar wander so there is no need to worry about creating crystalline sentences. The novel’s structure can be explained easily, although it might be difficult to grasp at certain points. The book is divided into a Beginning, The Middle and The End and entails constant changes of character as well as a fractured perspective. There are no quotation marks and what we can call chapters begin in mid-sentence, which then breaks into poetry at times. This stream-of-consciousness writing provides a window into the chaotic, ordinary mind, which is one of the most genuine representations of how people feel and the way they act. This calls for the master of this sort of writing, Virginia Woolf herself. In her essay “Modern Fiction”, she states:

“Life is not a series of gig lamps symmetrically arranged; life is a luminous halo, a semi-transparent envelope surrounding us from the beginning of consciousness to the end.”

And she is right to do so, for this chaos is found in our minds and it is what makes us human and alive. Our humanity is expressed in the way our thoughts change, are always breaking and are never still. Our minds can never be a still surface for long stretches of time, but are always broken by waves of our deepest, inner thoughts and emotions, so violent at times that they shatter all that attempts to get in their way.

“Everybody at this table is in broken pieces which won’t go together, pieces which are nothing to do with each other, like they all come from different jigsaws, all muddled together into the one box by some assistant who couldn’t care less in a charity shop or whatever the place is that old jigsaws go to die. Except jigsaws don’t die.”

Representing a child’s voice in a novel is a tricky thing for a writer is always in peril of either overwriting or underwriting it. You can’t have your character too mature in expression or assume that the child is ignorant of the outside world but find balance so as to ensure that the uniqueness of the narrator is genuine enough for the character to speak to the readers as a real person instead of coming out as pure writer’s imagination, which is always felt as artificial. Ali Smith manages to strike the right chord in this novel. There are no first person narrators, but third person points of view. In this myriad of stunning portrayals, Astrid’s voice certainly stands out. She is twelve years old and the way she orchestrates her thoughts and language is genuine to such an extent that she’s immediately loved as a character and distinguished from the rest.

“She looks at the way the sun comes through the leaves above her head i.e. the story of Icarus who had the wings his father made which the sun melted when he flew too close. She wonders what the difference would have been if the father had made the wings for a girl instead, who maybe would have known how to use them properly.”

Ali Smith is a splendid writer of sheer linguistic talent demonstrated in the way Astrid’s use of vocabulary changes throughout the novel as she matures while being shaped by what is taking place in her surroundings, even though the plot takes place over just a few months. Her use of language corresponds to her maturity and mindset and echoes Joyce’s portrayal of Stephen Dedalus in the novel A Portrait of the Artist as a Young Man. True talent is at work here, for the two mentioned authors shape both the character and language used showing how intricately connected they are, as well as that they change alongside each other and never apart.

It is also essential to pay attention to how the atomized family we encounter at the beginning of the novel changes by an unknown person called Amber who walks into it and manages that every member falls in love with her in a different way. Astrid is a camera buff who likes contemplating universes within universes and often talks at cross purposes with her brother Magnus, a cloudy adolescent living with the repercussions of a horrible school prank. Eve is their mother and Michael their philandering stepfather. No one actually knows Amber but they all think that someone of them invited her over. This yet again shows how the family is coming apart at the seams for there is no open communication between its members. Amber is the rock other characters break themselves against and the one who brings them to their limits. She is a pure literary construct created so as to push the novel’s plot along while the author expresses her viewpoint on matters stretching from media addiction to how chance manages to take control over our lives. The novel is built on a strong viewpoint on what being alive entails and is incessantly pierced by the feelings of guilt and self-righteousness.

“If he were this wine glass there would be hairline cracks holding him together, running their live little electrical connections all over him. Oh. To be filled with goodness then shattered by goodness, so beautifully mosaically fragmented by such shocking goodness.”

This adventure of a reading experience can be savoured at any time, but I recommend saving it for a rainy autumn day when you can trace raindrops both on your windowpane as well as in the novel.