About a Boy, Nick Hornby: The book or the film – is that the question? 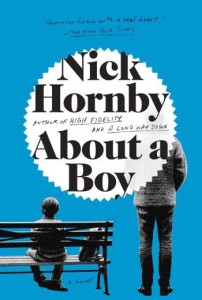 Discussions about books and film adaptations always seem to divide people. Book-lovers vs. film-lovers. You feel obligated, as if by some social norm, to choose a side and argue in its favour. In debates that ensue there can usually be no middle ground. You either adore the book, which makes you resent the director’s nerve to introduce plot changes, or opt for the exciting world of film that can take you to places you’ve never imagined with minimal effort on your part. Consequently, you can be tempted to discard the idea of reading books. It’s too much trouble anyway. After all, if you can watch the film adaptation, why bother reading? Some consider the idea laughable, although it’s bound to attract at least a disapproving shake of the head from readers of all ages.

However, I must come clean and own up to my own biases. I have on more than one occasion defended similarly flawed points of view, although as an ardent admirer of both media, I tend to appreciate the distinct qualities of both. But I have remarked a rather critical tendency that resurfaces in me every time I watch a film adaptation of a book I truly love. As I grab popcorn and drinks, my expectations drop low. I am ready to sit through another bold, yet sadly inadequate attempt at capturing the essence of the book. I can be critical, even unjustly so, for some inexplicable reason that might be down to that “social convention” of choosing between the two. Even more strangely, if I watch the film first and then read the book, I sometimes feel that the words fail to captivate me as the film scenes had done. I think of it as the rule of the first impression – first come, first liked. This elusive phenomenon (Google has never heard of such a thing) can make your life so difficult at times.

If there is one good thing about this book vs. film dilemma though, it must be in the pleasure of discovering stories that work well both ways. One that has recently caught my attention and is well worth sharing is the novel “About a Boy” by Nick Hornby, published in 1998 and adapted into a film in 2002 by Weitz brothers. The story is that of Marcus, a strange and socially awkward twelve-year-old who meets his complete opposite in Will – a reckless, child-free and problem-free Mr. Cool who even in his late thirties refuses to grow up. 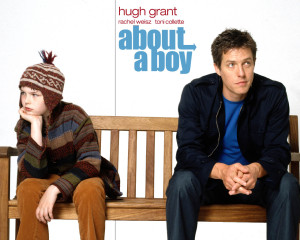 The film, which I saw first, is a heart-warming tale of an unusual friendship that due to its light and humorous tone can strike a chord with viewers of all ages. Among many other awards and nominations, it received the Academy Award nomination for Best Writing (Adapted Screenplay). Weitz brothers’ accomplishment stays true to the book and even the ending, which was altered, works very well, adding more excitement and drama to the final scenes. Hornby himself expressed his approval in an interview: “It’s like you’ve written the first two thirds and it could spring any way, they’ve chosen a path that I didn’t choose, but now wish I had.”

The book is characterised by a precise portrayal of characters and a humourous style which brightens even the darkest parts of the story. Written in a different tone, the story might have lost some of its appeal. I have laughed heartily at Will’s sarcastic comments Marcus takes literally and was amused by Marcus’s sincere yet childish attempts to sort out his mother’s problems. The characters’ development is at the heart of this tale, which is all about changes and progress. As much as Marcus learns and grows up, Will does the same under his influence. Along the way, they forge relations with other people who become that “backup” Marcus had been looking for all the while.

Two wasn’t enough, that was the trouble. He’d always thought that two was a good number, and that he’d hate to live in a family of three or four or five. But he could see the point of that now: if someone dropped off the edge, you weren’t left on your own. How could you make a family grow if there was no one around to, you know, help it along? He was going to have to find a way.

The central character of Marcus is an endearing figure, a true melange of William Blake’s Innocence and Experience. His worldview is that of refreshing optimism only an innocent child can muster in the face of problems adults cringe from. Marcus is naïve and fragile, yet determined to stand by those he loves. The film ending particularly emphasises his selflessness and audacity, as he walks out onto the stage, stiff-legged, with just a tambourine in his hand and the feeling that that “social suicide” he is about to commit means nothing if it makes his mother happy. “This is for my mom” mumbles Marcus to general laughter of his peers. However, Marcus has his priorities settled, which is more than can be said for many adults. Although hardly the representative specimen of all humankind, Will evokes the growing individualism and alienation in today’s world. The metaphor in the film is clear, all of us are “islands”, detached from mainland and immersed in our private little worlds, often carelessly oblivious to the needs of others.

You had to hand it to Marcus, he thought: the boy was awkward and weird and the rest of it, but he had this knack of creating bridges wherever he went, and very few adults could do that.

Whether you choose to read the book, watch the film, or both, this story is bound to put a smile on your face. Keep it close on those gloomy days when you feel the burden of life heavy on your shoulders and the need to escape reality overwhelming.

Will couldn’t recall ever having been caught up in this sort of messy, sprawling, chaotic web before; it was almost as if he had been given a glimpse of what it was like to be human. It wasn’t too bad, really; he wouldn’t even mind being human on a full-time basis.

Previous articleIn the Mists of Memory: The Sense of an Ending by Julian Barnes
Next articleThe Chaos of Being Alive in Ali Smith’s The Accidental

Ljubica Samardžić
English Language and Literature student at the University of Belgrade.