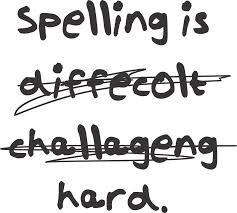 In the previous article on English spelling, we only tackled the well-known discrepancy between English spelling and pronunciation. Now, we are going one step further. Our next stop is the spelling behind individual words.

Here they are… The words and the explanations why they are so special when it comes to the spelling.

In Old English, vowels were spelled the same way regardless of a possible distinction between long and short sounds.

God (God) and god(good) were spelled the same. During the Middle English period, the scribes found a clever solution. In order to mark the length of the vowel, they doubled it. If the word contained a short vowel, they would double the consonant.

In Old English, suffix –ishformed an adjective from a noun. This suffix has had the meaning ’characteristic of’. The vowel in red is a short one. Consequantly, the scribes doubled the letter after short vowel. That is the reason why there are words in Modern English such as reddish, mannish, doggish.

On the other hand, the word radish did not enter English until the Middle Ages. A French -ish ending meant ’to initate an action’ as in punish and abolish. These words came from French and the doubling principle was not applied in those cases.

Have you ever wondered why there is a h sound in this word and in the similar words such as aghast and ghastly?

In this particular case, the blame is to be put on William Caxton. You know, the guy who introduced a printing press in England.

In Old English there was no h sound in the word ghost. Holy Ghost was spelled Hali Gast.By the time Caxton arrived on the scene, the vowel had changed. So, that was a bit of a problem. How to spell a new sound?

Before coming to England, Caxton had learnt the trade in Cologne and Bridge. So, he spoke Flemish. The word gast was spelled gheest in Flemish. This problem practically sorted itself out. The h sound was imported into the English word.

The word island is a special one because of the s sound in it.

In Old English, there were two variations of the word: iland and igland. The word came from ey + land. An ey meant a piece of land surrounded by water. So far so good.

Everything was nice and simple… Until the French arrived. Oh, those French people!

In the Middle English period, the word iland was confused with the French wordisleand people begun writing it in that way. To make things worse, people thought that the word sounded like ile + land. In that case, ile should be spelled as isle.And that’s how we got s in the word island.

To cut a long story short, it was a mistake.

For further information concerning this topic, I warmly recommend the book Spell it out by David Crystal. The book is absolutely wonderful!